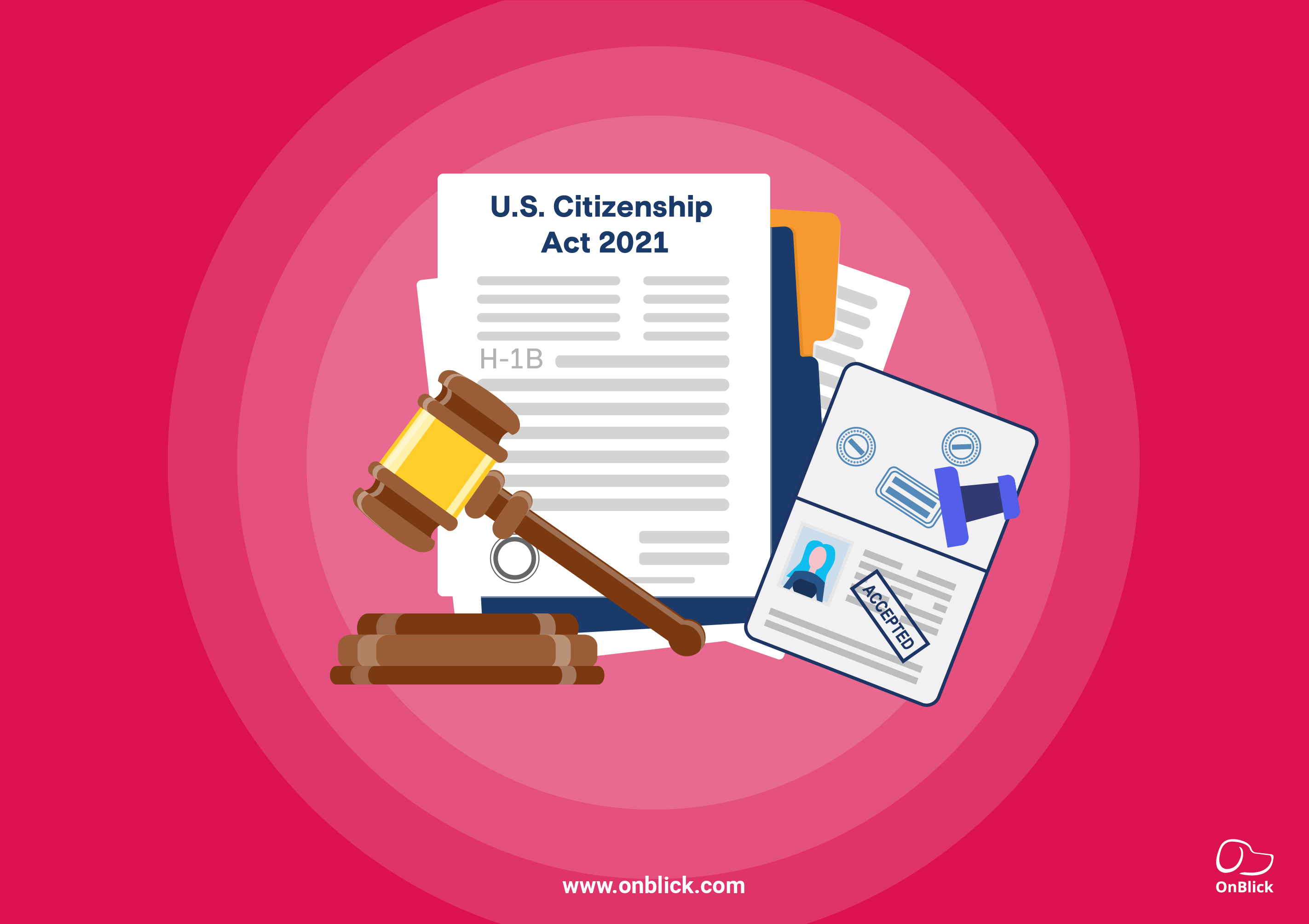 The U.S. Citizenship Act 2021 and the Reform of the Immigration Visa System

Ever since the Biden administration unveiled the U.S. Citizenship Bill 2021, various immigration reforms it put forth have been in the headlines. The bill states its purpose is “to provide an earned path to citizenship, to address the root causes of migration and responsibly manage the southern border, and to reform the immigrant visa system, and for other purposes”. The 353 page-long bill has its contents distributed under 5 titles which have subtitles and sections within them.

This blog discusses the various significant aspects included in the Bill with an emphasis on the Title III of the Bill that concerns the Reform of the Immigrant Visa System.

Clarification of the Terminology

Up until now, the word ‘Alien’ was employed throughout the Immigration and Nationality Act (INA) to refer to individuals who do not have U.S. citizenship and is not a U.S. national. As a move towards introducing more inclusive language and to recognize America as a nation of immigrants, the Biden Administration in its reform bill is eliminating the offensive word ‘alien’, and then replacing it with the term “noncitizen” in the INA, US Code, and uncodified provisions of the law.

The Title I of the Act deals with Earned Path to Citizenship and Other Reforms, and mentions the new Section 245B that is added to the INA. As per the said Section, the Department of Homeland Security (DHS) may grant Lawful Prospective Immigrant status (LPI) to a noncitizen (and spouse and children) who 1) meets the requirements in new Section 245G(b), including criminal/security checks and paying fees and 2) submits an application. No separate petitions have to be submitted by the spouses and children of LPIs. The following are the entitlements of the LPI

In short, the LPI is considered to be a stepping stone to obtaining the Lawful Permanent Residence (LPR) that will in turn enable individuals to apply for U.S. citizenship.

Some good news for the immigrants

• Spouses and minor children of LPRs to be reclassified as immediate relatives. When the spouses and minor children LPRs are reclassified as “immediate relatives”, the immigrant visa numbers would decline. This would pave way for many applicants who have been waiting several years to complete the green-card sponsorship process.

• Family unity to be promoted. This section would repeal the three- and ten-year bars for noncitizens who depart the United States after accumulating 180 days or one year, respectively, of unlawful presence in the country.

• F-1 students to be allowed “Dual Intent”. This section extends dual intent to full-time post-secondary F-1 students.  This would allow eligible students to apply for legal permanent residence status while they're pursuing their degrees.

• Changes to expungement and sentencing. This section changes the definition of “conviction” for immigration purposes to no longer include any adjudication or judgment of guilt that has been dismissed, expunged, deferred, annulled, invalidated, withheld, or vacated.  Only the period of incretion ordered by the court will be considered for immigration purposes.

•  Naturalization provisions to be modified. This section reduces the number of years needed to fulfill the physical residence requirement for legal permanent residents (“LPRs”) seeking to file for naturalization.  Under the revised provision, the residence requirement will be reduced to three years for those LPRs who, for at least three years before becoming an LPR, were both lawfully present and eligible for employment authorization.

A White House Fact Sheet published on January 20, 2021, says that President Biden sent the bill to Congress on his first day itself "to restore humanity and American values to our immigration system." The Fact Sheet states that the U.S. Citizenship Act (USCA) will:

How does the Act Impact Business Immigration?

If the Act is implemented, business immigration could be impacted in several ways. Title III of the Bill deals with the Reform of the Immigrant Visa System and has 4 subtitles that are divided into the following sections:

Religion is an impermissible ground for discrimination in administering immigration law unless expressly authorized by the statute (e.g. religious workers).

Noncitizens who earn a doctoral degree in the field of Science, Technology, Engineering, or Mathematics from an accredited US university are not subject to numerical limits of the green cards. STEM refers to the Department of Education’s Classification of Instructional Programs taxonomy within the groups of computer and information sciences, engineering, mathematics and statistics, physical sciences, and accounting. DHS can add fields at its discretion.

Note: Biological and biomedical sciences are left out as are health professions.

Noncitizens who are beneficiaries (or derivative beneficiaries) of an approved immigrant petition with a priority date that is above ten years preceding the noncitizen’s application for admission as an immigrant or adjustment of status are not subject to numerical limits. This takes effect 60 days after the enactment of the bill. Spouses and children will no longer count against employment-based numerical limits in family, employment, and DV categories.

Eliminates employment-based country caps. This provision will be effective beginning in FY 2022.

Allocates the extra 30,000 employment-based numbers noted above to EB-3 other workers.

DHS and DOL may establish a procedure to temporarily limit EB-2 and EB-3 in geographic areas or labor market sectors experiencing high levels of unemployment.

DHS may establish a pilot program for the annual admission of 10,000 immigrants whose employment is essential to the economic development strategies of cities or counties in which they will live or work. Labor certifications will still be required. The program sunsets in five years. Note that this is a program that will operate outside the EB categories so the 10,000 allotment does not affect the EB categories. DHS and DOL must issue implementing regulations.

In determining the order of allocating H-1Bs subject to the cap, DHS and DOL may issue rules to establish procedures for prioritizing such visas based on the wages offered by employers.

Makes F-1s dual intent if a student is enrolled full-time course of study.

H-4 children may extend their status beyond 6 years (and beyond age 21) if the parent is maintaining his or her status and the child was younger than 18 when first granted nonimmigrant status. For purposes of adjusting status as a derivative, the H-4’s age at the time of filing the parent’s immigrant petition (or labor certification) will determine eligibility. All H-4 spouses and children are eligible for EAD cards under a new INA Section 214(s)

A new INA Section 241(t) has been added that says the authorized stay of a noncitizen previously issued a visa or NIV status as an F, H-1B, L, or O visa may extend their status if 365 days or more have elapsed since the filing of a PERM or an employment-based immigrant petition (I-140/I- 360/I-526). DHS may extend the stay in 1-year increments until a final decision is made to deny the immigrant petition or the later immigrant visa or adjustment of status petition. DHS shall authorize any noncitizen whose stay is extended under this subjection to engagement in employment in the US and provide an EAD for such reason.

Not all the provisions of the Bill are beneficial for the immigrants. Some of the provisions would be harmful to employers and employment-based immigrants. The major one is the awarding of H-1B petitions on the basis of the employees’ wages. According to Sec. 3407, “for allocating H-1Bs subject to the cap, the regulatory authorities may issue rules that establish procedures for prioritizing such visas based on the wages offered by employers”. Experts believe that the provision would disadvantage international students or other young people who command lower salaries due to less work experience. It is also expected to put the startups, smaller companies and firms outside of the largest metro areas at disadvantage.

It was on January 15, 2021, that the DOL issued a Field Assistance Bulletin (FAB) which states H-1B program obligations for common-law employers. The FAB discusses wage rates that H-1B employees must be paid besides the requirement for secondary employers to file the LCAs. According to the new system, an H-1B worker must be paid the higher of the prevailing wage or the actual wage. Biden’s plan would make permanent the Trump Administration’s decision to make obtaining an H-1B visa waged-based- a change that the Biden Administration initially delayed until December 31, 2021.

As opposed to the old lottery system of work visas, a wage-based system will prioritize the selection of visas to applications of those employers where the “proffered wage equals or exceeds” the prevailing level in that area of employment. The proffered wage is the wage that the employer intends to pay the beneficiary. This rule will also take into account the skill set that the respective worker brings to the country and cross-check whether such skill set is available at the same cost among the US workers. The rationale behind the system seems to be that higher wages indicate the most deserving candidates.

According to the above FAB, the H-1B provisions set basic wage and working condition standards for the employment of H-1B workers to ensure that their employment does not adversely affect U.S. workers. It adds that most of the obligations mentioned are employer-specific and seek to protect the U.S. workers employed by the employer from adverse impact. Experts believe that by cutting back the H-1B visas for skilled foreign workers and tightening wage-based entry barriers, the system is expected to serve the same purpose.

The above FAB requires the employers to file for H-1B petitions and LCA on behalf of the workers even if they do not employ or pay a specific wage to the H-1B professionals. This may lead to increase costs for the companies. Though the idea of a wage-based system is said to benefit U.S. employees, it will be a bane for the thousands of foreign IT professionals eyeing the U.S. job market, and the numerous employers in the country who rely on the H-1B program.