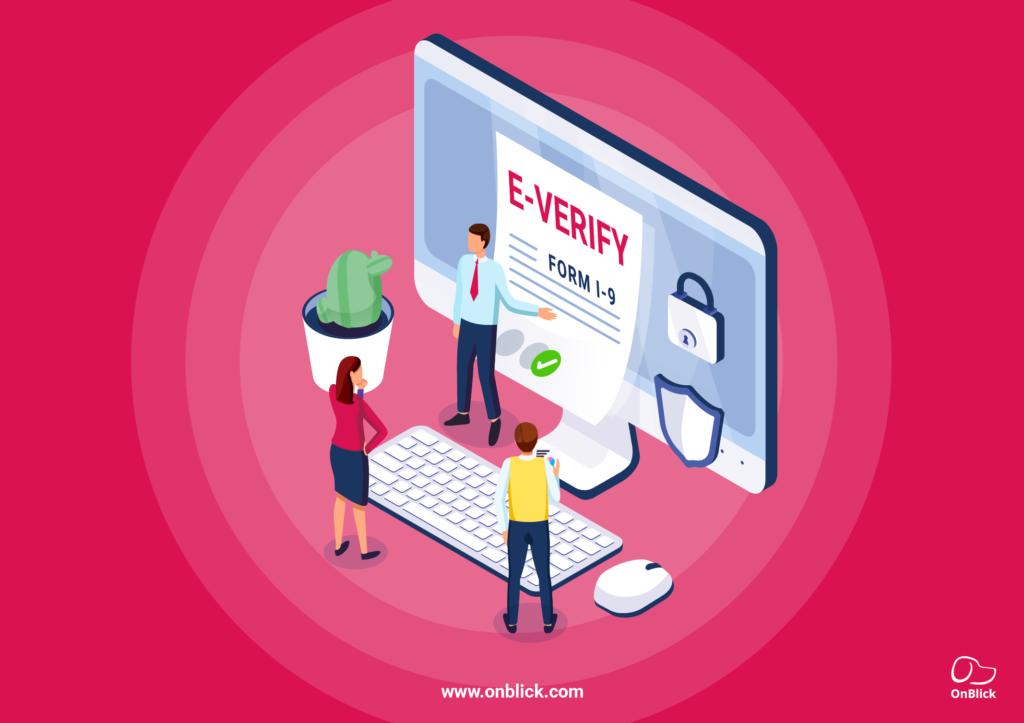 Is E-Verify a Replacement for Form I-9?

This is a question that still confuses most of the employers, and the answer to it is an absolute NO. Though some employers still consider E-Verify as an electronic version of Form I-9, it is nowhere a replacement for I-9.

Here is an article that throws some limelight on the topic and clears up your confusion.

Every U.S employer who is hiring employees for pay is sure to come across this Form I-9.This is the Employment Eligibility Verification Form, which is used for the verification of identity and employment eligibility of hired individuals.

Immigration Reform and Control Act has mandated the completion of Form I-9 for all the employees hired after 1986. This is to guide employers in preventing the employment of any undocumented individuals who are not authorized to work in the country. Also, to prevent workplace discrimination based on citizenship or national origin.

Completion of Form I-9

Every employer is responsible for completing the Form I-9 of all their employees within three Federal days from the start date of employment. They are also responsible for retaining it for three years from the date of hire or one year after the employment is ended (whichever is later).

E-Verify is a web-based system that allows enrolled employers to confirm the eligibility of their employees. This is done by electronically matching the employee's information on the Form I-9 against records available with the Social Security Administration (SSA) and the Department of Homeland Security (DHS).

This is a voluntary program, but it is also considered mandatory for some employers. Employers with federal contracts or subcontracts that contain the Federal Acquisition Regulation (FAR) E-Verify clause should complete the process. However, participating in E-Verify does not remove an employer's obligations to comply with the I-9 process.
‍

In 1996,Congress created a pilot program to provide employers an electronic way to verify the authenticity of the information provided by their hires. However, no U.S employer was enrolled in this until the year 2008.

In 2008,President Bush issued an executive order requiring all federal contractors to enroll in the program. So, starting from this year, employer enrollment has increased gradually.
‍

Form I-9 vs E-Verify

Form I-9 is the key element for E-Verify and the corresponding queries are submitted only after the completion of newly-hired employee's I-9. But there are some key differences between the two:

E-Verify is an additional verification measure along with Form I-9 to help employers confirm the employment eligibility of an individual. It checks the identification numbers of millions of legal workers per year, and thousands of businesses use the program. Hence, it has become one of the largest government surveillance programs in the United States. Despite this success, most businesses refuse to adopt the program.

Why do Employers Refuse Enrollment?

Now, the interesting question is: WHY?
Small businesses in particular have a concern regarding the time spent on the completion of this process. The reason for this, is the manual process of entering data of every new hire in the organization. Once enrolled for E-Verify, it mandates the completion of the process for every new employee hired after enrollment.

Though this program is free of charge, participation in the program requires careful training and preparation. And some employers find it difficult to do so.

E-Verify is Now on OnBlick

With OnBlick, employers can eliminate all the work of entering every employee's data for E-Verify. OnBlick's integration with E-verify Web Services automates your work with a simple click. It will retrieve the corresponding employee's information and supporting documents from Form I-9 and auto-populate it in E-verify. This would save a lot of time for the employer and the hassle of manual data entry.

Employers can also create and submit the case(s) through OnBlick, which resolves the issue of multiple logins with E-verify portal to create case or check for updates. Employers can also handle the DHS/SSA TNC cases with guided workflows. Integrate with OnBlick today, and manage your E-Verify with ease.