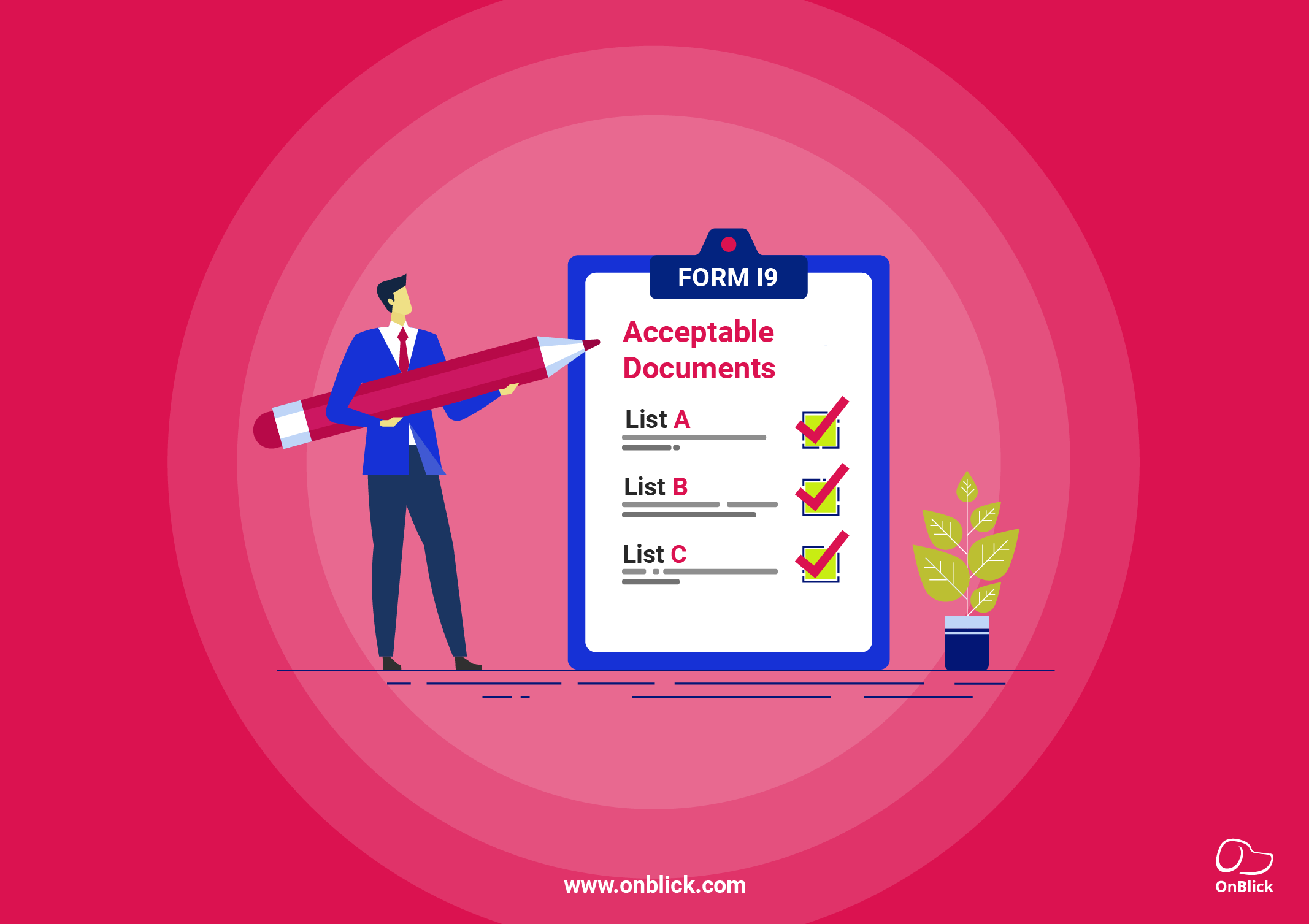 Do you know that ICE delivers thousands of audit notices to businesses across the US in each fiscal year? If you don’t, it's high time you looked for ways to assure regulatory compliance. Here is the Form I-9 documents checklist that helps ease your Form I-9 compliance.

As an employer, you are responsible for completing the Form I-9 of each individual (citizens & non-citizens) you hire. All the employers and employees must complete their Form I-9s within 3 days from the start date of employment along with presenting the set of acceptable documents.

Immigration and Customs Enforcement (ICE) states that Section 274A (b) of the Immigration and Nationality Act (INA), codified in 8 U.S.C. § 1324a (b), requires employers to verify the identity and employment eligibility of all individuals hired in the United States after November 6, 1986. 8 C.F.R. § 274a.2 designates the Employment Eligibility Verification Form (Form I-9) as the means of documenting this verification.

However, the Form I-9 documents vary based on the status of the individuals hired for employment. Attesting wrong or expired document(s) in the form may bring in huge penalties during ICE audits. So, the employer has to physically verify all the Form I-9 documents presented by its employees before completing and retaining the form.

The Form I-9 documents are segregated into three Lists (A, B and C).

‍List A documents: These documents establish both identity and employment authorization.

‍List B documents: These documents establish the identity of the employee.

Any individual attesting to the documents for Form I-9 can submit either one selection from List A or a combination of List B and List C. As an employer, you cannot specify which documents to be submitted from the list of acceptable documents. Regulatory authorities suggest that the employees should be permitted to present documents of their choice, as long as they are acceptable for employment eligibility verification purposes.

List A documents based on the categories of individuals

As the documents in this list establish both the identity and employment authorization of the employee, it serves the purpose. Since some of these documents are a combination of 2 or more documents, such documents presented together count as one List A document.

‍A US citizen (or) A non-citizen national of the US has to submit one of the following document(s):

List B documents based on the categories of individuals

A US citizen (or) A non-citizen national of the US (or) A lawful permanent resident (or)an alien authorized to work has to submit one of the following documents (along with one from the List C of acceptable documents given below).

List C documents based on the categories of individuals

A Lawful permanent resident (or) An alien authorized to work has to submit one of these List C documents.

*Unrestricted Social Security cards that are acceptable List C documents are only issued to:

ICE has conducted more than 6,400 Form I-9 inspections in the Fiscal Year 2019, which resulted in millions of dollars of penalties for the organizations. In determining penalty amounts, ICE considers five factors: the size of the business, good faith effort to comply, seriousness of violation, whether the violation involved unauthorized workers, and history of previous violations. Irrespective of the size of your business, it’s compulsory that you complete Form I-9 for each employee since penalties for failing to produce a Form I-9 range from $230 to $22,927 per violation. Be wary that repeat offenders receive penalties at the higher end. Even minor mistakes on your Form I-9s can add up to big fines. If you pay a little extra attention when completing those Form I-9s, you can save some dollars. After all, money saved is money earned, right?

Hope this Form I-9 documents checklist guides you in completing your Form I-9s correctly and thus helps you avoid penalties during the event of an ICE audit. Always remember that though not required by law, ICE recommends conducting Internal I-9 audits to review the forms, identify missing I-9s, rectify the errors, and ultimately ensure compliance. See how OnBlick can help you in this regard.